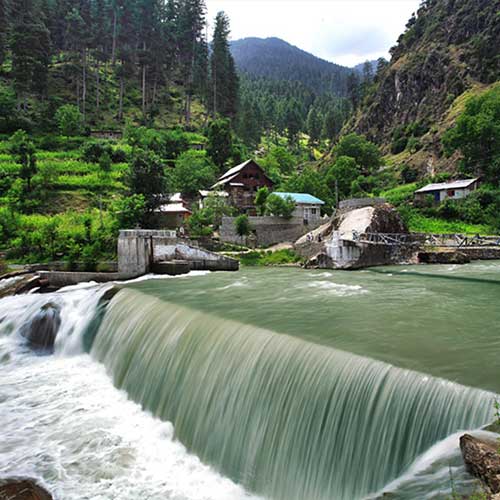 About 240 kilometers long the picturesque Neelum Valley is situated to the North & North East of Muzaffarabad. Running parallel to the Kaghan Valley, it is separated from it by snow covered peaks, some over 4000 meters above sea level. Excellent scenic beauty, panoramic view, towering hills on both sides of the noisy Neelum River, flourishing green forests, streams, high altitude lakes and attractive surroundings make the valley a dream come true.

It is about 09 Kms from Authmaqam, Neelum (Karen) is situated at the right bank of Neelum River at about 1524 meters above sea level. It has captivating scenery. A small bazaar and a Tourist Lodge of Tourism Department situated on the bank of meandering river Neelum across which one can have a glance of other side of Keran in Indian held Kashmir.

Located at a distance of 30 kilometers from Dawarian, it is a breath-taking green spot at an altitude of 1981 meters. Shardi and Nardi are the two mountain peaks overlooking the valley, named after legendary princesses Sharda & Narda. It has a captivating landscape with numerous springs and hill sides covered with thick forest.

19 Kilometers journey from Sharda, upstream takes one to Kel. It is a small valley at the height of 2097 meters. This is another pleasing place in the Neelum Valley.

A panoramic and break-taking greenery village is situated 9 kilometer from Kel followed by hiking track. Due to its scenic beauty a cable car is also offered pick and drop service from Kel to Arang Kel and mostly used by tourist. Arang Kel is renowned for tracking, hiking and adventure tourism.

Depart for Islamabad with a brief stopover at Kutton (Jagran Valley) to view the Hydro power project and the mesmerizing beauty of Kutton village. Arrive Islamabad and drop at designated place.